MIAMI, Sept. 7, 2022 /PRNewswire/ -- Oceania Cruises, the world's leading culinary- and destination-focused cruise line, announced its most extensive, expansive, and immersive series of World and Grand Voyages for 2025. The line reprised its perennially popular Around the World in 180 Days voyage for 2025, albeit in a very unique east-to-west navigation. Underscoring the increasing popularity of the brand's demand for longer, languid, destination-immersive voyages, Oceania Cruises also introduced a series of seven Grand Voyages ranging in length from 50 to 111 days. 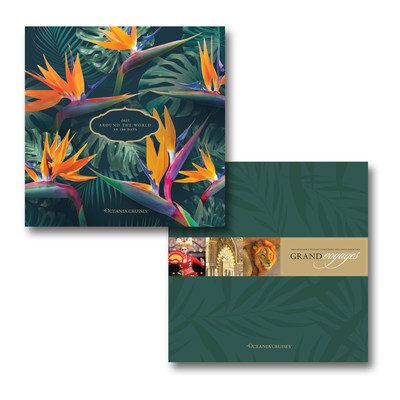 "This new collection of globe-spanning itineraries includes both iconic and off the beaten path ports of call and offers a wealth of opportunities for our guests to explore the farthest corners of the globe, making the journey just as rewarding as the destination," stated Howard Sherman, President and CEO of Oceania Cruises.

Each of these Grand Voyages takes advantage of one of life's greatest luxuries: time. The journeys range from a spectacular 111-day expedition of wonders across the South Pacific, New Zealand, Australia, Southeast Asia, Africa and the Mediterranean to an extraordinary journey that is the first of its kind – combining fascinating explorations of three continents aboard two small, luxurious ships with an incredible multi-day Land Program in between. Above all else, these itineraries were designed for the intrepid explorer, the traveler with an endless wanderlust and a penchant for enjoying the finer things in life.

First Of Its Kind – Far and Wide: The Ultimate Odyssey
74 Days, Two Ships, Five Countries, Three Continents – December 22, 2024 - March 6, 2025
This ultimate odyssey transcends the imagination as it explores three continents on two small, luxurious ships linked by an amazing, immersive Mid-Cruise Overland Program. Kicking off with a 50-day circumnavigation of Australia, Indonesia, and New Zealand sailing roundtrip from Sydney, guests are then flown via business class air service to South America for explorations of Patagonia, Antarctica, and the Chilean Fjords. Linking these two extraordinary cruises are two enthralling overland tours that guests will get to choose from – six days in the extraordinary Blue Mountains of Australia or six days in the Andean Lakes District of Chile and Argentina. Truly the ultimate odyssey, this eclectic journey stretches from great cities Down Under to Ushuaia, the city at the end of the world, and staggeringly beautiful lands of Patagonia and Antarctica.

The Gold Standard of World Cruises – Around the World in 180 Days
180 Days, Five Continents, 32 Countries, 89 Ports – January 5, 2025 – July 3, 2025
Setting sail on a rare east-to-west journey, the 2025 Around the World in 180 Days cruise is filled with exotic horizons and illuminating experiences. From Miami, the 656-guest Insignia heads south for explorations in vibrant Brazil and the wilds of the Amazon before crossing the great Atlantic Ocean for adventures in the villages and majestic landscapes of Africa. En route to South Africa, this crossing features a call on the most remote inhabited island on the planet: the volcanic isle of Tristan da Cunha. Insignia then continues east, to the great cities and untold wonders of Asia, with explorations of some of the most exclusive islands lining the Indian Ocean along the way. The French Comoros, Maldives and Seychelles give way to captivating destinations in Myanmar, Thailand, Vietnam, Japan, Indonesia and beyond. As Insignia heads south along the less explored coast of Western Australia, you will have the opportunity to discover some of this continent's most unsung treasures. During our navigation of the South Pacific, we'll make a rare call on Champagne Bay on Vanuatu along with some of French Polynesia's most stunning islands before heading north to visit the lush Hawaiian Islands to conclude this global journey.

The full 180-day Around the World cruise is made even more exceptional with our Exclusive Prestige Package, which includes a collection of generous amenities such as Free Pre-Paid Gratuities, Free Laundry Services and immersive Shoreside Events.

Around The World Highlights

Oceania Cruises is the world's leading culinary- and destination-focused cruise line. The line's seven small, luxurious ships carry a maximum of 1,238 guests and feature the finest cuisine at sea and destination-rich itineraries that span the globe. Expertly curated travel experiences aboard the designer-inspired, small ships call on more than 450 marquee and boutique ports across Europe, Alaska, Asia, Africa, Australia, New Zealand, New England-Canada, Bermuda, the Caribbean, the Panama Canal, Tahiti and the South Pacific in addition to the epic 180-day Around the World Voyages. The brand has a second 1,200-guest Allura Class ship on order for delivery in 2025. With headquarters in Miami, Oceania Cruises is owned by Norwegian Cruise Line Holdings Ltd., a diversified cruise operator of leading global cruise brands which include Norwegian Cruise Line, Oceania Cruises and Regent Seven Seas Cruises.